I planned an easy ride for the sixth day. I didn’t want to look devastated at the first checkpoint. But the track was more complicated than I expected … as always.

It was one of the toughest mornings of the race. I didn’t wake up in a dark dirty hole, but in a very comfy and soft bed. I didn’t want to leave. But the first checkpoint was only 100 kilometres away and I was convinced to make it. My plan was to do it before three in the afternoon, so I could reach the borders with the Czech Republic at the end of the day.

It was easy in the beginning. Nice roads, straight track with only a small pitch. Part of the route was in a forest, but it was easily passable and I was moving forward very fast. I have already biked through big mountains and all the hills here were tiny and ridiculous. It was all too beautiful, so it had to end soon.

I don’t even know, when it came. Suddenly it was really hard to move forward. Hills became longer, steeper and I had to go back to pushing. I was close to the first checkpoint, but I had to fight really hard with each one kilometre. Sometimes I checked, if I’m alone and if so, I screamed what I think about these roads. And it wasn’t anything pleasant. Then I stopped checking, if I’m alone. I knew that no one is going to help me here…

Bike in a hole

In my worst moment, I threw the bike into a hole. I had to admit very soon that it won’t solve any of my problems, so I grabbed it again and started pushing. As if it wasn’t enough, I destroyed my braking plates on the rear tire. From now on, I only used the front brake. 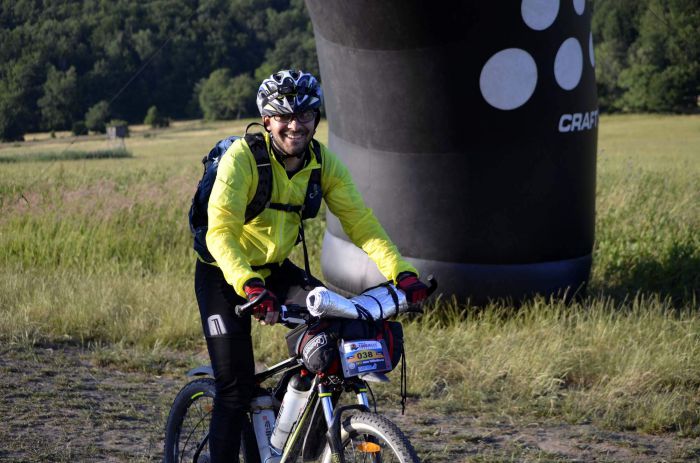 After more than 500 kilometres, I finally saw that finishing black arc. I was so happy. I grabbed a bottle of Kofola (Czech coke) and ate something that the people in the CP offered me. They were very helpful. I told myself that I was going to sleep here. The tents looked warm and friendly.

A runner arrived about half an hour after me. It was kind of depressing, because … you know … I’m on a bike and he is on his on own feet and still can keep up with me. A few shots made it right.

It was getting dark and I had to decide, if I was going to continue on my journey or join the cheerful crew of CP1 and enjoy the beautiful night full of drinking and eating. I decided to challenge myself (as usual) and continue. The sun went down already and the bears left their lairs. I didn’t know if they just wanted to scare me, but the crew told me that there is a few of them.

I entered the woods. I shouldn’t have done it. Hurray to the woods

After 500 metres I broke my gearing. I could have returned back to CP1, but that would be total defeat. So I continued. I got lost. I was pushing my bike through some bushes trying to find the path again. I lost my bottle with water. And then everything drowned in darkness. Since my headlamp was only decorative (its light was very weak) I stuck the bike spotlight to my helmet. It was nice a change.

I saw a lot of shining eyes that were watching me on the road. I was hoping that it’s only the eyes of an innocent doe. Fortunately, nothing attacked me. After a big dose of fear, I made it to a solid road. I wanted to challenge myself once more and cross Váh, which is a big river in Slovakia. For a few tens of minutes, I was lost in the reed, but I made it to the shore.

A group on the other side gave me advice about the best place to cross the river. I took off my boots, got the bike on my shoulder and went into the water. After a few steps, I almost fell into it. I gave it up after several minutes. I wanted to try it again tomorrow. It will be easier in sunlight. I made a camp next to the shore and I fell asleep very soon…

Forget about running with music, it’s time to read a book!

Everyone is running with music these days. Well, most of us. But what about trying to do it a bit differently?

Does have Endomondo bright future?

On March 2012 I used Endomondo for the first time. It is now 6 years. I bought a premium app and then even a premium membership and keep it for several years. Since Endomondo was bought by Under Armour I have the feeling that platform is not evolving anymore. I cancelled my membership and thinking about searching different app.